Ever wondered that if God knows what he’s doing? I’m writing here what God did for my wife. 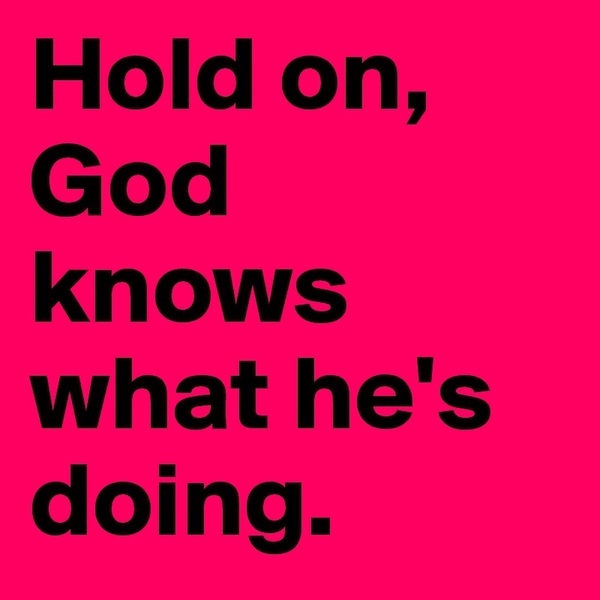 If you read my previous post, you will know how God faithfully bought us across continents admidst a world-wide lockdown. Here, I write how God blessed my wife with a job she never expected.

My wife was a credit risk analyst with a regional bank (let’s call it Tiger Bank 😉) back in Kuala Lumpur, Malaysia. It was her first professional job and she held on to it for 8 years. She never really wanted another job or to move out of Malaysia. On the other hand, I always wanted to exit Malaysia and she knew it from day 1. I was desperately looking at every opportunity to get out while she was carrying on with her job. The job at Tiger Bank was a safe place to her. It was an easy commute and she knew most people there. It’s also a well known bank in Malaysia that when you mention you work in Tiger Bank, many people do look in awe (we all love that don’t we?).

When I was attending interviews in lockdown, things were changing at her workplace. She joined a new team in 2019 and was still adjusting to her new role there. But then Covid happened. As economy tanked all over the world, financial institutions were affected badly. She had to work long hours during the initial days of lock-down and the duration kept increasing. There were adhoc requests to submit financial reports with short deadlines. She was working 14 hours a day and occasionally pulling all nighters.

WhatsApp was yelling at 4 am / 5 am / 6 am. As someone sharing the same bed, it was affecting my sleep and my interview prep. Some days, when wake up at 7 in the morning for interview prep, I would find her in the desk not having slept the whole night. The answer would be ‘I’m cleaning up the reports before sending it to the bosses. Two times she did work for full 48 hours without sleep’. I told her to quit and get rid of the job and stress, as we weren’t in need of much money. But she wouldn’t. (If you’re thinking to sue me for asking my wife to resign, you can contact my lawyer).

Fast forward, in Jan 2021, the LORD blessed me with my dream job in Amazon. I still hadn’t discussed with her on the plans to move to Germany. Also, I didn’t want to be the husband who asked his wife to quit her job to purse my dreams. When the offer came for me, she was looking at all possible options 1. to transfer to Tiger Bank London 2. remote work 3. take a long sabbatical (2 years). Like I mentioned earlier, Tiger Bank was her comfort zone. She was still finding ways to keep her job and work around that. I was mum and also didn’t really keep it much in prayer. I had a towering faith that if God has given me a job, he pretty much will solve the rest of the equation. To get the job was the difficult part for me honestly and the rest was not my problem. It was God’s 😄.

Meanwhile, her annual review was coming in February. Considering the effort that she put in last year to clear up everything in time, it was a no-brainer it would be a good feedback with a decent bonus. But, she got an average review with the least bonus she ever received in her career. The reason given was that the economy was not good due to covid, which in turn meant the bank was not doing good, which in turn meant less bonus for her. But we sneaky humans know how to sniff the bonus everyone received, don’t we ? Turns out there were no deductions due of Covid for the others and in her same team, there were promotions, awards and 3 times more bonus for other staff. My wife was devastated. What do you think happens next? Disappointment, resentment, a feeling of being deceived followed by tears. Prayers also followed. Questions were asked to God: why did you let this happen? Why is the world cruel? In 3 days, she became a psalmist and was almost competing with King Solomon over the ownership of Ecclesiastes.

The words of the Teacher, son of David, king in Jerusalem: “Meaningless! Meaningless!” says the Teacher. “Utterly meaningless! Everything is meaningless.” What do people gain from all their labors at which they toil under the sun?

What I think happened…

I came with a different perspective to this whole situation (of course, every outsider has a perspective to someone’s problem. Don’t they ?). I believed, what happened in the past 1 year was that, she was so focussed on her job and getting things done, satisfying her manager demands, making sure her work is clean while losing solid prayer time. She used to spend 1 hour praying and reading the Bible but these were reduced to a mere ~5 mins prayer along with a short passage from the Bible before sleep. (Satan does know how to keep us occupied, doesn’t he ?)

After much disappointment, tears and all night praying, she handed in her resignation informing the bank that she wasn’t recognized for her efforts. I asked her what made her resign and she said God spoke to her to let go of that job. God had handed her a verse as a promise.

Don’t be afraid, for I am with you. Don’t be discouraged, for I am your God. I will strengthen you and help you. I will hold you up with my victorious right hand.

(Women listen to God better than men don’t they 😝)

And then blah blah, you should have guessed by now, our flight took off and we landed in Berlin.

My wife had to do a job hunt now. She hadn’t attended an interview in 8 years. She had no resume and didn’t have a linkedIN account. I prepared a resume copy pasting her banking experience into software engineering one. It didn’t look good but hey, atleast there is one now.

She sent it to 50+ companies and heard nothing back. She learnt through some friends that the job market here in Berlin works a bit different to Asia. Your resume and how you potray yourselves are considered vital to land a role. CVs in Germany usually include a photograph and a clear task split and gives a clear understanding of who your are in a single glance. And boy-o-boy, we learnt that german language is an unspoken must for bankers and she should look out for a start-up based company. No wonder, she didn’t get any calls.

We modified the resume and sent it again. Nothing much happened. A few replies came asking further questions on her experience but didn’t want to proceed with a phone screen.

2 months passed and one fine afternoon, Deutsche bank called her for a phone screen. It was a job I applied on behalf of my wife with the old copy paste resume months back. For those who don’t know Deutsche bank, it is a german bank which happens to be one of the two german banks that have english service for customers. But she had an assumption that they will expect german skills or at least speaking level as most of the work-force speak German.

The phone screen happened and to her surprise, the interviewer didn’t mention anything about the need for german language. Our church in Berlin and cell group in KL was praying alongside us. The next round came, another two rounds happened and she got the job. It was really unexpected as this was the first interview she did in Germany and God blessed her with something she never expected. The added bonus was that it was a senior role, a promotion to her role back in Malaysia.

We are still in awe of what happened but my hypothesis is like this - God wanted to teach my wife a lesson that no job is a safe place. Yet an other perspective - God didn’t like reduced prayer time from her. We will never know for sure it was either one of the above or something totally different but I will ask when I meet him.

We just knew one thing - God planned things way ahead of our move, and on his command everything fell into place at the right place at the appointed time.

I believe we have to accept a fact that no job is a safe place. There’s no comfort zone in earth. Atleast for a christian, there’s no safe place in earth. Everyday is a battle and in every minute lies a trap. One other lesson she learnt was - When God says “let go of something”, it’s better to let go whatever it is and blindly follow his advice. He will sort it out. He even sorted Adam’s mistake by sending his son to earth thereby settling the score with Satan, didn’t he?

I will leave you, the reader with a verse from the Bible.

God is our safe place and our strength. He is always our help when we are in trouble. So we will not be afraid, even if the earth is shaken and the mountains fall into the center of the sea, and even if its waters go wild with storm and the mountains shake with its action. - The Psalmist 46: 1-3

PS: Also, while reading this post, if you think that I’m accusing / complaing about Tiger Bank’s work ethics, you’re missing the point. This is a post on God’s work in our lives and not about any corporate place. I wanted to give in the details with facts rather than an abstract write-up and hence the details. Also, I worked in the bank for almost 4 years, it’s a great workplace and I had a wonderful time there.